Greenpeace lawyer confident that decision will deter other companies “from abusing the legal system in their quest to bully those who speak truth to power.” 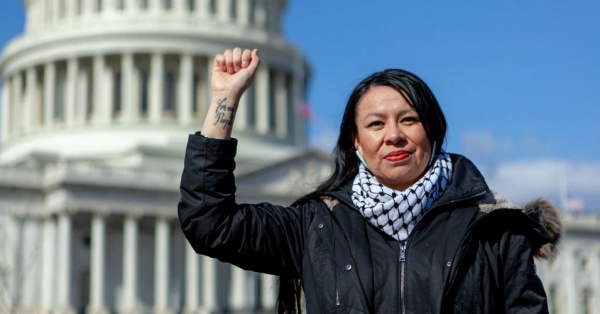 Krystal Two Bulls and other defendants celebrated on Thursday after a federal judge dismissed a lawsuit targeting water protectors who organized against the Dakota Access Pipeline (DAPL). (Photo: EarthRights International/Twitter)

In a “landmark” ruling on Thursday, a federal court in North Dakota tossed out a “baseless” case against Greenpeace and other environmental and Indigenous activists who organized protests against the deeply controversial Dakota Access Pipeline (DAPL), which drewthousands of people to the Standing Rock Indian Reservation in 2016.

“This is what happens when greedy corporations go after Indigenous women grounded in the power of prayer, the power of relationship building, and the power of collective organizing.”
—Krystal Two Bulls, defendant

District Judge Billy Roy Wilson dismissed (pdf) all claims against all defendants in a lawsuit brought by fossil fuel giant Energy Transfer Partners (ETP), which sought to hold the water protectors liable under the Racketeer Influenced and Corrupt Organizations (RICO) Act for millions of dollars in alleged damages.

While the protests against DAPL, which were met with a militarized response from law enforcement, were ultimately unsuccessful—and the now-operational pipeline already boasts an alarming track record of oil spills—the activists and their attorneys welcomed the win in court on Friday, noting that Wilson’s ruling aligns with that of a similar case that was dismissed in 2017.

“We are confident that this decision will set a precedent that deters Energy Transfer and other corporations from abusing the legal system in their quest to bully those who speak truth to power,” declared Greenpeace USA general counsel Tom Wetterer. “This is a huge victory not just for Greenpeace but for anyone and everyone who has ever stood up against powerful corporate interests.”

Wetterer posited that the dismissal of ETP’s “baseless lawsuit against Greenpeace and others sends a clear message to companies trying to muzzle civil society that corporate overreach will not be tolerated. It is also a check on corporate efforts to silence dissent.”

“We are confident that this decision will set a precedent that deters Energy Transfer and other corporations from abusing the legal system in their quest to bully those who speak truth to power.”
—Tom Wetterer, Greenpeace USA

Defense attorneys called the case a “textbook example” of a Strategic Lawsuit Against Public Participation (SLAPP).

“The goal of a SLAPP is not to win, but to burden the defendants with costly and time-intensive litigation procedures, while creating a chilling effect that discourages others from speaking out on issues of public concern,” EarthRights International explained in a statement on Friday. “The judge’s swift dismissal suggests that the federal judiciary may be losing patience with these abusive tactics.”

Denouncing ETP’s “embarrassing and expensive attempt to silence organizers who stand for justice,” Astha Sharma Pokharel, a legal fellow at the Center for Constitutional Rights, charged that the “baseless lawsuit should never have been filed, but [this] victory will only strengthen the movements they tried so hard to suppress.”

Celebrating the win, defendant Krystal Two Bulls concluded: “Loss. Defeat. Dismissal. This is what happens when greedy corporations go after Indigenous women grounded in the power of prayer, the power of relationship building, and the power of collective organizing. Not only was my right to free speech upheld by this decision, but also my rights as an Indigenous woman to steward this land. Now, more than ever, we ALL need our rights to share our voices uplifted, supported, and protected.”

This work is licensed under a Creative Commons Attribution-Share Alike 3.0 License

Veterans from any branch of military service, family members, friends, and anyone interested in ending war are invited to join Veterans For Peace.